0
The year is almost over in our sport. The rodeos are over, the top 15 have been decided, and the last major jackpot of the year is here. The USTRC Open Shootout brings the best of our sport together for the last big, open jackpot we have to help finish our year with a bang. There is more than a big payout and awesome prize line, the winners of this roping get prestige. That being said, here are my top picks to win the USTRC Open Shootout!  As a disclaimer, I am entered in this roping, so I am taking myself out to keep this as unbiased as possible.

Caption – Clay Tryan and Travis Graves at last year’s USTRC Open Shootout.
My third pick to win the Open Shootout is Kaleb Driggers and Travis Graves. These guys have been tearing it up all year long! They haven’t had a great amount of success at the jackpots but there is no reason why they couldn’t come through on a stage like this. Kaleb has range and TG can clean up anything. If they can put it together for 5 runs, they have a very good chance at coming out on top.
My second pick is the team of Chad Masters and Kory Koontz. They are on fire already this week. They won the DFI jackpot in Elk City Oklahoma on Wednesday and they just won another here in Guthrie Oklahoma today! Chad is in the ZONE! He looks like he can be anywhere in the arena and catch.  Kory has had a tough year and he is wanting to win bad. He has been heeling great for Chad all week, and I can see him continuing to heel great for him through the weekend. Both of these guys have won this roping and both are great jack potters. I bet they can keep their rhythm going all the way through Sunday for a big win at the Shootout. 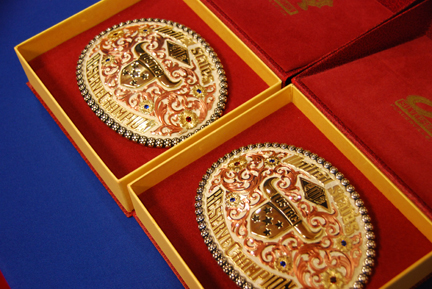 My top pick to win the Open Shootout on Sunday is the team that is leading the World Standings right now, Clay Tryan and Jade Corkill. They are by far the best jackpot team out there, and are obviously proving that they are the best team in team roping by leading the standings!  Both guys have won this roping twice before, so we know they can do it again. Although Clay  won the church roping in Guthrie Thursday night, he has struggled a little this week, BUT that guy knows how to win when the pressure is on. I can easily see him coming through at the right time. Jade is Jade! His name says it all for itself. This guy is amazing. I have watched him heel all year long and I can honestly say I don’t know of any Heeler that is more consistent than him. He manages to pull off shots I can’t even fathom! It’s incredible! With Clay’s ability to get the job done when the pressure is on and Jade’s consistent catching, these guys should come out on top.
There are plenty of other teams that can win this roping, but these are the teams I can see coming through. These three teams have proven it in the past and are the best in our sport for a reason. They all ride good horses and can rope just about anything that they draw. It’ll be fun watching!  I hope to see y’all this weekend watching the USTRC Open and maybe get a chance to meet some of yall! DH
Drew Horner