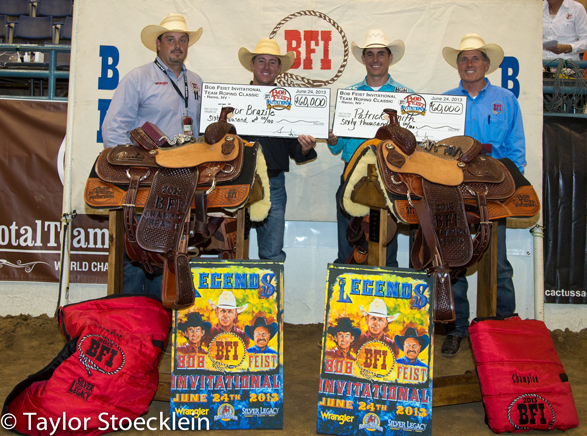 In their seventh season together, former world champions and NFR average winners Trevor Brazile and Patrick Smith used a $120,000 payday at the BFI to add to their impressive resume. – Photo credit Taylor Stoecklein

Reno, Nev., June 26, 2013 – After winning 17 world championships with a rope, what kind of victory can still make rodeo’s only $5 million cowboy rip his straw hat from his head and pitch it toward the heavens? Team roping fans found out on June 24 at the 36th Annual Bob Feist Invitational in Reno, Nev.

“I haven’t thrown my hat but three times in my career,” said Trevor Brazile. “Once at the Timed Event [Championships of the World], once at the NFR, and right here today. I’m getting better at it – it took me a minute to get the crease back in it this time.” 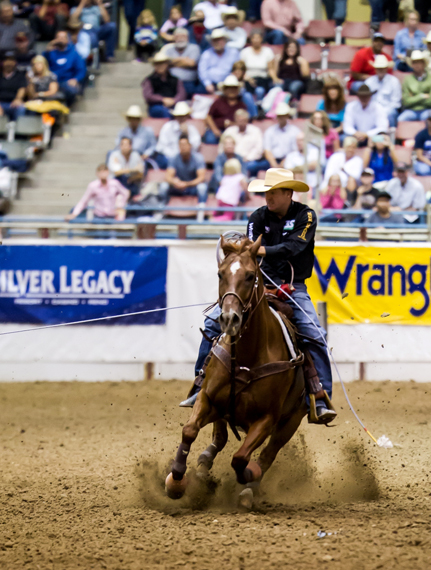 Trevor Brazile was flawless at the BFI aboard Banker, and kicked off rodeo’s biggest week with the richest jackpot win of his team roping career. – Photo credit Taylor Stoecklein

The famed all-around superstar from Decatur, Texas, and his partner Patrick Smith roped six steers in a record 40.54 seconds to earn $60,000 apiece at the richest one-day Open roping in the world. They had to beat a field in which both the second- and third-place teams also obliterated the nine-year-old record of 43.75 seconds formerly held by Turtle Powell and Monty Joe Petska.

Not only that, but the BFI’s five-year-old record for the fastest time on one steer (4.46 set by Coleman Proctor and Jake Long) was smashed by Brock Hanson and Kory Koontz, who posted a 4.36 in the third round. They would hold the record just three hours before it was shattered by a 4.21 turned in during the fifth round by Spencer Mitchell and Dakota Kirchenschlager. Remarkably, a five-second run didn’t even place in the fifth round.

While Brazile and Smith didn’t place in any rounds, they led the average all the way through and are now the fastest team to ever rope six at the BFI. Throughout their seven-year partnership, they’d won the NFR average (2008), claimed the world’s championship (2010) and raked in more than $1.5 million – but never topped the BFI. Brazile, 36, had never even made the short round.

“I think now I may have just gotten my fees back from over the years,” he quipped.

More seriously, he added, “This is such a great roping – everyone who team ropes wants to win this. I’ve had a lot of chances, and every year I’ve wanted to win it worse. Something just always happened. When you have the top 100 teams in the world all here in one day, it’s like football. It’s any given Sunday.”

Aside from it just being his “Sunday,” Brazile credits his win with riding “the fastest horse he owns” – a 13-year-old sorrel named Banker – and better scoring.

“I got better starts than I used to get here,” said Brazile, who was without Banker all last season due to tendon issues. “One start was almost too close for comfort. But that was the biggest difference – I made steers look better than I used to make them look.”

What made the $120,000 windfall even sweeter was that it came as he and Smith were having their worst rodeo season to date. They hadn’t even cracked the top 30 in the world standings.

“When things haven’t been going that good, and then you have one more day when they don’t go good, it’s tough,” said Smith. “But when you win one of the biggest ropings there is, you’re more hungry to show up at the next rodeo. It makes it so much easier. Our roping finally feels right.” 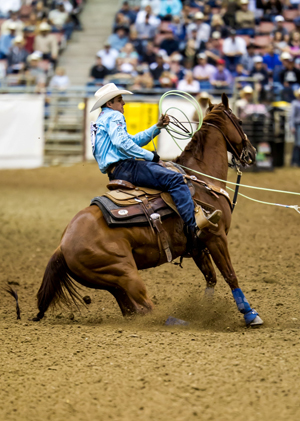 Back on Amigo after the horse underwent a second surgery to remove chips in his knee, Smith stopped the clock fast all day and led the average after every steer with Brazile. – photo credit Taylor Stoecklein

Back on Amigo after the horse underwent a second surgery to remove chips in his knee, Smith stopped the clock fast all day and led the average after every steer with Brazile. Photo Credit – Taylor Stoecklein.Smith, 33, is a nine-time NFR qualifier and two-time world champion from Lipan, Texas, who won his first BFI back in 2005 with Clay Tryan.

“It’s been so long, this win almost feels like the first time,” he said. “This is something you never forget.”

Especially at a roping where Smith has joined the ranks of the best jackpot heelers ever, including Kory Koontz, Rich Skelton and Clay O’Brien Cooper.

“There’s something about the BFI that has a different feel,” he said. “It’s the history; how long it’s been around and how many legends have roped here in the past. But it’s also because you just have one partner; one chance. Man, you’re so nervous for the first steer here. Then the grind sets in and it’s about staying mentally strong and sticking to your game plan.”

Smith rode his 2007 AQHA/PRCA Heel Horse of the Year, Amigo, fresh off a second knee surgery.“Amigo’s been an outstanding horse for me for seven or eight years,” said Smith of the 13-year-old. “We x-rayed him the day before I came out here just to be sure he couldn’t re-injure himself. My vet, Dr. Josh Harvey of Decatur, did a great job helping me get him back, and Bowie Equine Hydro Therapy rehabilitated him.” 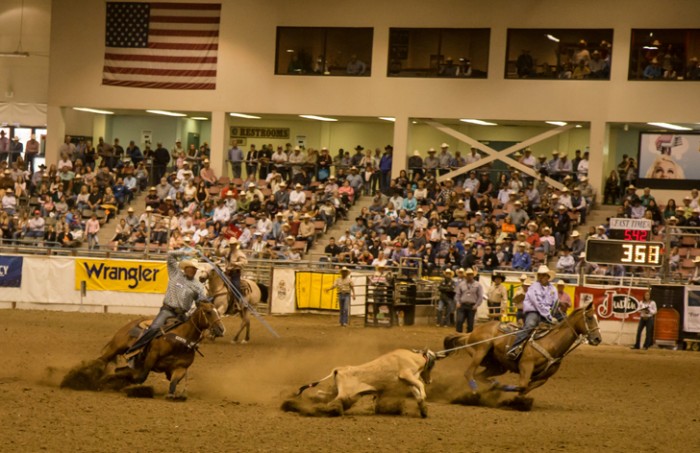 Erich Rogers and Cory Petska roped aggressive and were rewarded with $84,000 plus prizes for second place. They also caught two other steers that day to take the lead mid-way through the Reno Rodeo. – Photo credit Taylor Stoecklein

The reserve champions, Erich Rogers and Cory Petska, also blasted past the BFI average record by roping their six steers in 41.25 seconds. They’d drawn up in the Reno Rodeo slack just outside the BFI venue that same afternoon. Immediately after making a 5.5-second run in slack, they trotted back over to the BFI short round. From the second call-back position, they posted a 7.21 to guarantee themselves $84,000 and prizes.

“It almost made it easier, knowing I had eight steers to rope today,” said Rogers, who would later catch the eighth steer on his good horse, Rob, to go to the lead in the Reno Rodeo. “I just wanted to turn them all. I’ll take second any day.”

The reserve title was sweet redemption for Rogers, who in 2005 at just 18 years old watched a BFI championship slip through his fingers when his heeler, Shawn Shirley, lost his rope in the finals.

As for Petska, he utilized a new strategy that paid off this year.

“I always came here concentrating so much on winning that I usually roped terrible,” explained Petska, who said the added rodeo run helped him free up his horse, Cruiser. “Today I just roped each steer as it came.” 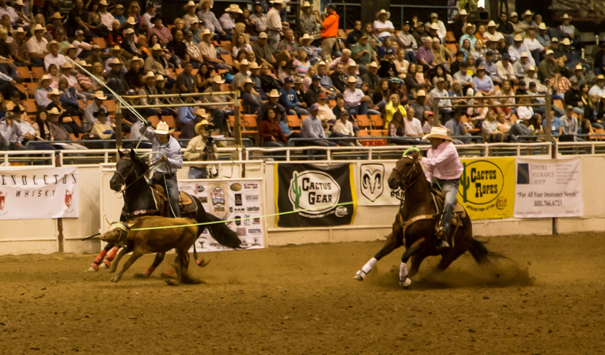 Any other year, Brandon Beers and Jim Ross Cooper’s time on six steers would have won the BFI. They placed third and took home $53,000 plus awards – including a custom bronze for Head Horse of the BFI. – Photo credit Taylor Stoecklein

Not only did Brandon Beers and Jim Ross Cooper also break the BFI average record with their 43.47 to place third (for $53,000 and prizes), but Beers’ bay mare, Jewel, was named Head Horse of the BFI. While a little nervous in constitution, he said she has crazy speed, rates extremely hard and leaves the box so fast that he once nearly fell off her.

“She worked awesome here,” he said. “It’s almost like you just stay out of her way.”

Beers was pleased to see Jewel join the ranks of his friend Riley Minor’s horse, Cadillac – one of the all-time best at the BFI. Minor’s horse Ketchup also won the award last year.

“It’s funny, I joked with Riley before the roping that he should ride my horse so she could win Horse of the BFI and I would ride his,” said Beers, who also heels on Jewel. It was Beers’ first competition back together with Cooper, who rode his black gelding, Kobe. 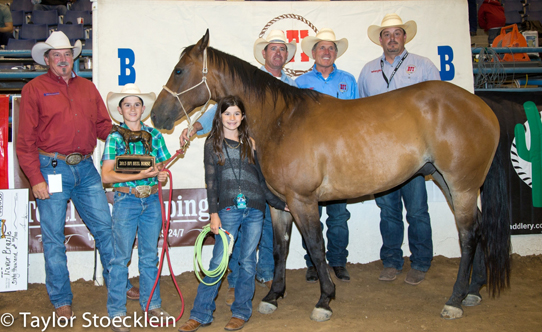 Will Cowden and his sister, Kenna, proudly pose with their horse, Rattler, on whom their dad Cody has placed in the top 10 at the BFI for two years straight with Daniel Green (they’re flanked by Montana Silversmith’s Steve Miller at left and BFI owners Daren Peterson and Corky Ullman at right).

The Heel Horse of the BFI winner was Will Cowden’s 11-year-old dun gelding, Rattler. Cowden, just 13, had let his dad – eight-time NFR heeler and 1997 BFI champ Cody Cowden – ride Rattler to a ninth-place finish this year with Daniel Green and a fifth-place finish last year.

“Will rode him at the junior rodeo in Turlock [Calif.] on Saturday,” said Cody of the Colonel Freckles-bred horse. “Will got him as a gift from a friend of the family a couple of years ago, and we’ve had a lot of luck on him ever since.”

In fact, BFI fans would be smart to watch for Will and his junior-rodeo partner Mason Cowden – the sons of 1993 reserve NFR average champs Cody and Liddon Cowden – to be invited one day to the famed BFI.

Complete results from the 2013 BFI are available at www.bobfeistinvitational.com, and DVDs of the event will be available later this summer through Rodeo Video (800-331-1269). Additional photos can be ordered through Taylor Stoecklein (208-720-7418).

About the BFI:  The Bob Feist Invitational, founded by Bob Feist in 1977 to showcase and reward the premier ropers of the sport, is owned today by Ullman-Peterson Events. Annually it invites the top 100 teams in the industry to the Livestock Events Center in Reno, Nev., where they compete in six rounds for a cash-and-awards package worth more than $600,000 in 2013.