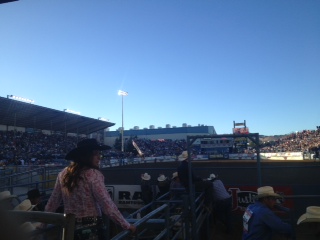 Reno Rodeo has been good for us so far. The format is a back to back two header with a short round.  There are 96 teams. This format goes like this: they divide the 96 teams between how many performances they have at the rodeo. There are, I think, 10 performances at Reno. One of the performances is the short round, so that makes 9 possible performances for the 96 contestants to rope in. They divide the 96 contestants by the 10 performances, which roughly gives you 10 to 14 teams in each set. Every set starts in a slack at 2 pm that day and they run the first round. After that set runs their first round steer, they then take the top 8 fastest teams to the performance that night at 730 pm, and the remaining teams that did not qualify for the performance that night run their second round steer that day. Every set is run like this up until the short round. The top 12 teams on 2 after every set has roped, qualify for the short round.
This format is great for team ropers in a number of different ways. It makes it easier on traveling because we only have to show up at the rodeo for one day unless we make the short round, and it levels the playing field and makes it more fair for everyone in the team roping at that rodeo. I hope that makes sense. It’s tough to understand  the different formats of rodeos, but hopefully I can explain it a little better in the future.
I mentioned earlier how I’ve been a little strong with my handles and have been having trouble giving Buddy a clean look to heel back there. Well, he brought it up to me, and we have been trying these past couple days to make a slight change in my handles to keep them softer so he can heel them easier and faster. It’s been more of a mental transition than it is physical. I have been trying to visualize myself doing it the right away, so I can do it the right way in competition. Reno seemed like the perfect rodeo to do it at because the steers this year are significantly smaller than usual and a lot lighter, so I could slow down to give a good handle, and also the back to back two header with a short round makes it a little “easier” to win money by just catching 3 steers. I was excited about implementing my practice runs into the rodeo arena, especially at Reno and the next couple of weeks this summer. And it all seemed to work out…
We made two good runs which puts us at 3rd call back to the short round right now with about 25 teams left. We have a good chance at making the short round and a good chance at some good money for both the PRCA World Standings and also the Tour Standings. These tour rodeos are crucial for us so we can get into the Tour Finales at Puyallup, Washington and Omaha, Nevraska and to also help us be able to rope in the new tour the PRCA is starting this year, the Champions Challenge tour.
I said earlier that I have been having trouble being soft with my handles and as a result I have been jerking the weaker steers down too easily. Our first steer was good. He was slow and weak, so when I roped him I did what I had been practicing as much as I could. I still almost jerked him down a little bit, but Buddy waited him out and we were 5.4 on him. Made a good run for the first round and right now we are placing in the first round and hopefully might get some money for that.
Our second was a little stronger. We knew what he was because we saw the team that had him in the first round run him. Funny thing is that the secretaries office had miss wrote the draw, so before we knew we had the runner, the draw actually told us we had a different steer that was actually the slowest one out of all the possible steers. The mistake was cleared up in time for us to know which steer we had really drawn. Good to know we had the steer that runs hard and not the slowest steer in the herd. Could of been bad for us. Ha!
Knowing we had the runner and knowing we were 5.4 on our first round steer, we went into it wanting to be sharp and clean, but still be aggressive. I still needed to get a good start and be sharp roping the steer but needed to make sure I still did what I had been practicing for a couple days. SLOW DOWN IN THE HANDLE!! We went out and did exactly what we wanted to do. Made a good clean run and were 5.7 on our second round steer. Puts us 11.1 on two and currently sitting 3rd callback for the short round.
Right now we are flying to Pecos, Texas for a rodeo this Friday morning then flying right back to Reno for the short round there. Looking forward to the chance a some big money at Reno to help kick our summer run off and to win some Tour money to keep us up there in the standings. I’ll be talking to y’all soon! Have a good one!
Twitter: @drewhorner24
Facebook: https://www.facebook.com/dhorner24?fref=ts