» Blog » Durfey One Step Closer To Repeat Trip To American

Durfey One Step Closer To Repeat Trip To American

On Saturday night, Durfey’s run of 7.72 seconds was the second-fastest in the third round and easily qualified him for Sunday’s top-10 short round. On Sunday, Durfey must post one of the six fastest times to advance March 1 into RFD-TV’s $2 million rodeo, The American presented by Polaris Ranger, held at AT&T Stadium.

At The American in Arlington last year, Durfey won his event and $100,000 plus roughly $40,000 in prizes. This year, because Durfey gained entry via the Semi-Finals rather than being invited as one of the top 10 in the world, he could win the $1 million bonus as a repeat champion.

Also on Saturday night, Tyler Wade and Kinney Harrell made the fastest run of the entire week – a 4.20 – to lead the team ropers into the short round, while steer wrestler Riley Duvall also carries plenty of momentum into the sudden-death round after posting a 4.28-second time in his event.

The $500,000 American Semi-Finals continues Sunday at 2 p.m. (Central) and will be broadcast live on RFD-TV. Tickets are available at the Cowtown Coliseum box office, by calling (800) COWTOWN, or at stockyardsrodeo.com.

Tickets for RFD-TV’s The American, presented by Polaris Ranger, and the Iron Cowboy VI are on sale at the AT&T Stadium Box Office, all Ticketmaster locations and at americanrodeo.com. 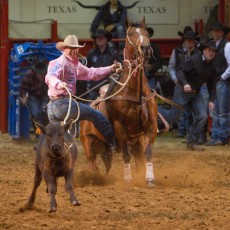