“I knew when I dallied it was over. I don’t even know if the flagger had dropped the flag when I threw my hat,” said Petska, who is typically cowboy-cool quiet, but could not contain the flood of feelings that hit him when he knew he’d won “the first major” of his career. “I’ve won the NFR (Wrangler National Finals Rodeo) and Houston twice. Days like those—and today—are defining moments in a career. I’ve been high team at the (George) Strait (Team Roping Classic) three times and didn’t finish. This is a straight-up dream come true.”

“This makes life so much easier on the financial side,” Rogers said. “I was down to my last $1,000 as we’re getting ready to take off for the Fourth of July. That makes you hungry and gives you the will to win. Cory and I know our run. If we do everything like we do in the practice pen, our run’s set up to be fast. I’m so happy. This is an amazing feeling. What a stress reliever. This is a thrill.”

“They took me in and look after me like one of their own,” Rogers said gratefully of his Marana home away from his native home of Round Rock, Ariz. Mrs. Cory Petska is, of course, four-time World Champion Barrel Racer Sherry Cervi. “It’s an awesome partnership and an awesome friendship. We pep each other up. There’s no negativity around the rig. We all take care of each other and enjoy it, win or lose.”

“We don’t charge him rent, but he has to turn me steers every day when we’re home,” chuckled Petska, as they loaded Sherry’s truck with all their BFI prizes, including Coats Saddles and Gist Buckles. “That’s his rent. Erich and I are around each other 24/7, and he’s like my brother. We’ve adopted him. He’s part of the family.”

Petska is the son of NFR header Paul Petska and World Champion Barrel Racer Gail (NFR heeler Monty Joe Petska is Paul’s little brother and Cory’s uncle). Gail was a dominating force in the 1970s aboard a little sorrel horse named Dobie. Cory’s entered the BFI most years since he turned 18, though there were times he had to make a tough decision.

“There were years we had to choose between the BFI and the Fourth of July rodeos when I roped with my dad,” said Cory, who previously placed in the BFI average with reigning World Champion Header Clay Tryan. “When I was a kid watching my dad and Monty Joe rope here in the outdoor arena (where the BFI was held from 1984-88), I sat on the bucking chutes and dreamed of winning this roping. This is a big deal to me. It’s been a long time coming.

“We have money in our pockets now, so we can just go do our jobs. That’s what’s fun about Erich and me. We keep doing the same thing and talking it out through the ups and downs. We’ve had a good year at the rodeos, too. We’ve been placing right along (and on BFI day were ranked third in the world).”

Team Rogers-Petska is in its third year, and their BFI track record includes a reserve title behind Trevor Brazile and Patrick Smith in 2013. Brazile and Smith still own the six-steer BFI record with 40.54 seconds that year.

“It’s an amazing feeling to have Cory behind me,” said Rogers, who typically talks to his heeler while riding out of the arena after every run. “We talk about our run all the time. They say the header is the quarterback, but Cory calls the shots when it comes to helping me do what I need to do to set things up for him.”

This year’s Head and Heel Horse of the BFI awards—Montana Silversmiths bronzes and Cactus Gear stable blankets—went to Rogers’ 15-year-old sorrel head horse, Rob, and Clay O’Brien Cooper’s bay heel horse, LB, who’s 18 now. Rogers has been doing battle without Rob off and on for the last couple years due to ligament and tendon issues.

“I got Rob back about a month ago, and he’s the whole program,” Rogers said. “This is his first big event back, so this is really amazing. He won this roping for us, and he won his own award, too. Rob’s the easiest horse to score on and rope on, and he handles cattle outstanding. Having that great one makes life in the arena so much easier. The great ones pay your bills and are like your best friend.”

Cooper bought LB three years ago from BFI Kingpin Kory Koontz, who won the roping with Rube Woolsey in 1995 and a second straight time with Matt Tyler in 1996. Koontz is third behind Clay Tryan and Rich Skelton on the all-time BFI earnings leaders list.

“LB’s an old, solid horse, and it’s way better to be riding an 18-year-old than an 8-year-old,” said seven-time World Champion Team Roper and ProRodeo Hall of Famer Cooper. “When you’re riding an older horse there are usually no mistakes, unless it’s pilot error. This horse has a lot of speed, and the cattle run here so you need plenty of gasoline to get where you need to go. You have to be riding a really good horse anywhere you go nowadays at this level or you’ll get beat up. Good things happen on this horse.”

Petska rode Scooter, an 11-year-old sorrel horse his Uncle Marty gave him. “He’s one of the best horses I’ve ever ridden,” he said. “He’s easy to ride, he stays out of my way and he lets me do my job. It’s not about how many moves they make. It’s about how few moves they make and let you catch. Having a great horse on fresher, wilder steers is critical. We had two good horses here today that fit our styles.”

BFI producers Corky Ullman and Daren Peterson again called on Flying T Cattle Company to provide the steers. “The steers were really good this year,” Petska noted. “They were a little wild, and everybody had a chance. The cattle and conditions set this roping apart.”

“You score ’em out there, and chase six steers that are trying to outrun you,” Rogers added. “This is a tough roping mentally, too. There’s an hour between steers. A lot of thinking goes on between runs at this roping.”

The champs, who were the high team back after five rounds, didn’t really have a BFI-specific strategy riding into the roping. “I just did my job and roped steer by steer,” Petska said. “I didn’t watch anybody in the building today. I was just trying to beat the steers. Everybody who does this for a living puts in about the same hours and ropes really good. I think when you win a roping like this it’s just your day.”

Note: Lone Wolf Photos are available to publications running this press release, courtesy of the BFI. 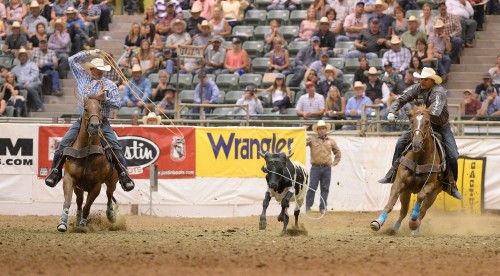 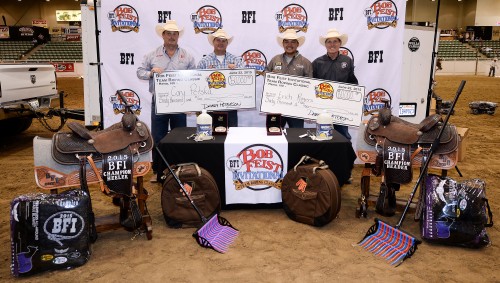 Article courtesy of the BFI.