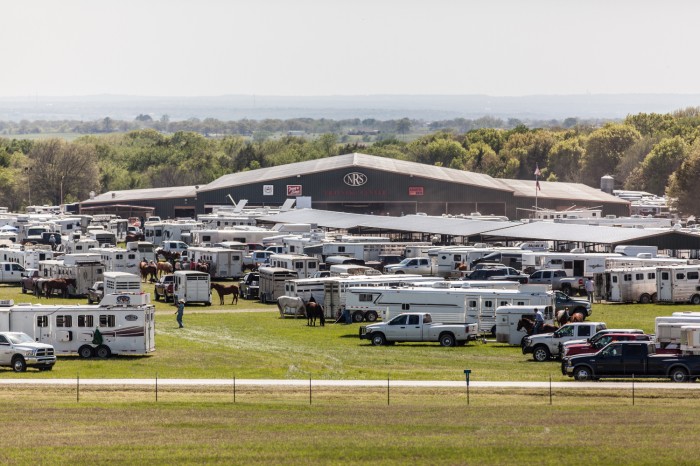 The Fourth Annual Cimarron NRS Team Roping Classic presented by Cinch Jeans was nothing less than another amazing event, especially for those who brought home a piece of the $515,000 in cash and prizes. The books were filled within a couple hours of opening again this year. This prestigious #11 roping brought in a total of 660 teams from all over the United States.
The NRSTRC gives the non-pro roper a chance to win the big prizes and cash. James Wood Motors presented the two Chevy Dually pick-up trucks. The matching three-horse bumper-pull trailers were presented by Cimarron Trailers. Trophy saddles from the NRS Saddle Shop went to the reserve champions, while all of Sunday’s top 75 teams received jean jackets from Cinch.
The first full round was held on Friday, April 11. The second was held on Saturday. The ropers attempted to play it safe to make it back to Sunday’s finals. After the first round 358 teams were left with a chance at the average, but the rest continued to knock them down for a chance at the $17,424 round money. Jason Alegria and Lorraine Moreno were 6.13 on their first steer for $3,484. Garrett McIntire and Chris Smith were the fast time of the entire weekend in the second round with 5.55 seconds.
The second round eliminated another 178 teams from the average and left the cutoff time at 21.21 seconds for the top 75 teams to make it back to Sunday’s finals. The finals consisted of the teams starting clean on another three full rounds.
The pasture, once filled with trucks and trailers, had almost cleared for Sunday’s rain showers and short go. After the church service, the teams saddled up to see who was going to take home the coveted prizes. Forty-three teams caught their first steer. Shawn Scott and Anthony Echelle were fast time with 7.83 seconds.
After the second round, only 21 teams were left with a time on two head. Cort Smith and Corley Henderson were 6.49 for fast-time in the second round.
At the start of the last and final round, you could only hear the sound of the announcer, Ben Clements calling off the teams and the rain drops on the roof. For most, the last round was the last chance to win some money back. All but the top 20 teams were throwing fast to try to get some round money. Sheldon Field and Dillon O’Gorman made the fast time with 6.03.
The average paid eight places for a total over $200,000. In the end Junior Cervantes and Rey David Quinonez, both from Odessa, TX, took home the trucks, trailers and the check for $42,688. The team was third high callback and knocked their steer down at 7.85 seconds. With fingers crossed, they watched the last two teams catch their steers, but not fast enough to beat out their time.
“I was so nervous watching the last two teams go. I saw the first team go down the pen to be kind of long, so I thought we were good there. Then I saw the high team back throw right out of the box, and wasn’t for sure until they announced it,” Quinonez said.
Both Quinonez and Cervantes said they would have been excited to win the beautiful saddles, but were sure happy to drive home the new rigs.
This was the first year the two have roped at the NRSTRC, and both took home their biggest win ever, yet.
“Just recently we started roping together more often. We leased out some fresh cattle and started going for it,” Cervantes said. “This win doesn’t compare at all. It’s been a whole different experience.”
The high callback team, Mason Smith and Jimmy Garcia, didn’t go home empty handed. They ended second place and took home gorgeous fully-tooled NRS Pro Series Trophy Saddles and the check for $36,590.
With the help from sponsors such as, Cimarron Trailers, Cinch Jeans, James Wood Motors, Classic Ropes, Resistol Hats, Sweetie Pie’s Ribeyes, Tony Lama and Mortenson Trophy Buckles, the NRSTRC has grown to be one of the most talked about #11 ropings. Next year’s roping is already in the books for April 10-12, with a brand new set of matching rigs. 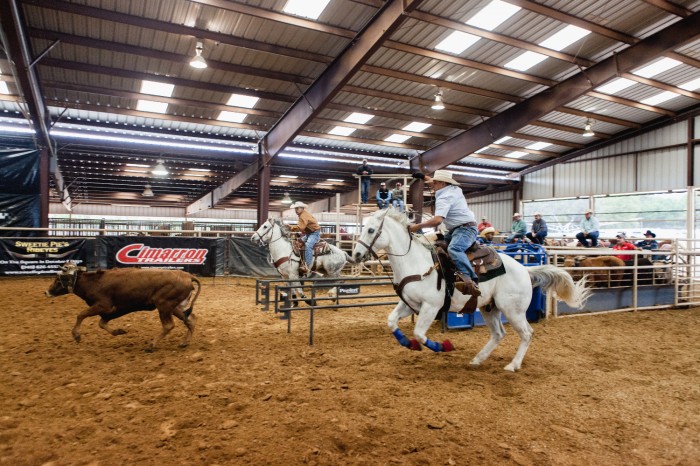 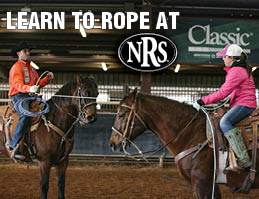